When Lionel Richie came out to sing with Little Big Town, I wasn't just distracted by the hair on that blonde chick.. 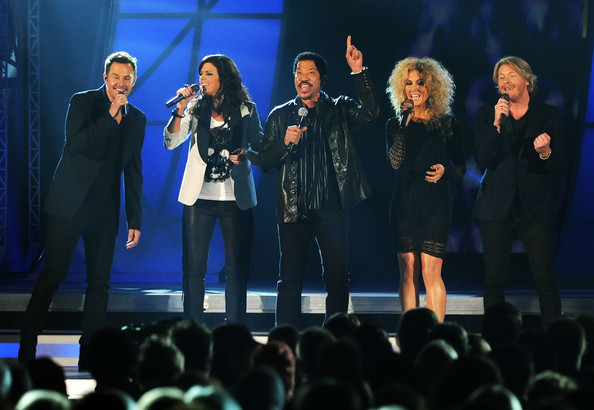 Me: That guy looks like Bill Rancic. Where's Guiliana, Bill?

Dave: Yeah he's really gettin into it
Me: No that's not really Bill Rancic
Dave: Who the hell is Bill Rancic?
Me: Really? You don't know who he is?
Dave: No idea
Me: He won the first season of the Apprentice?
Dave: Nope
Me: He's married to Guiliana from E News?
Dave: I got nothin
Me: So you really thought that was him up there singing?
Dave: How would I know?
Me: Oh gosh... I knew I should have just tweeted that instead of said it out loud.
Dave: Maybe...

Dave: Can we fast forward?

Not too long after that conversation..

Me: Oh no Carrie, that outfit is just as bad as the last one was. She should have had Rachel Zoe style her for this just like Anne Hathaway did for the Oscars.
Dave: That'd be another good one for the twitter.

The outfits I was referencing: 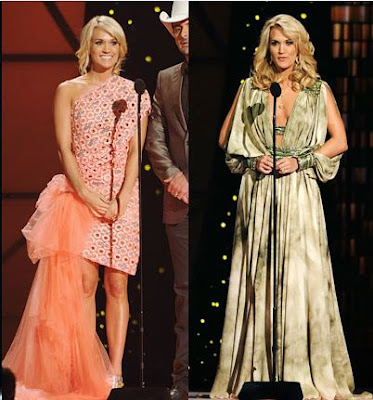 just wanted to let you know that i gave you a bloggy award over on my blog.

My husband is the same way... And totally agree about Rachel Zoe !

Hahaha. Just wanted to share that I LOL. And not in the text sense for a semi-funny comment that just warrants some recognition. But literally, LOL. Love it.