Dave has 10 tests in the next 8 days or something crazy like that, so I've been on dinner duty. I really enjoy cooking so I don't mind. Yesterday he was pretty stressed, had a case of the mondays, so I asked him what he wanted for dinner. His respnse, "something with chicken and bacon". Hmmm ok?

I like to have a little direction, but this was a tricky one. I started searching and found Pioneer Woman's Ranch Style Chicken had those 2 ingredients. For some reason I wasn't feeling this one, must be the unhealthy look of it. 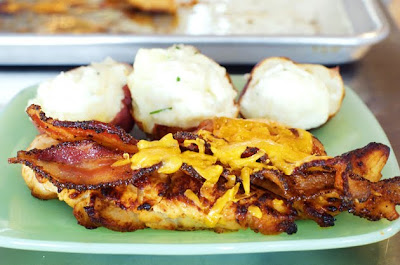 It looks SO yumm but SOO bad for you...
Then I found Paula Deen's Chicken wrapped in bacon bites. These have amazing reviews and I'll probably try them for a party sometime down the road. They also didn't seem healthy seeing how you roll the chicken in sugar... 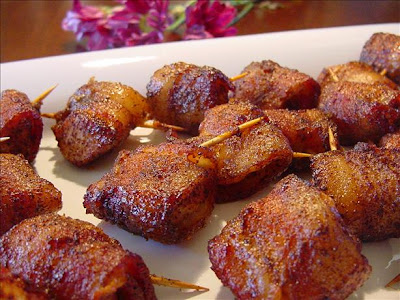 Then I remembered having Chicken Brochette at The Mantle one time. Bingo! That's what I want to make! It's listed on their menu as: Chicken Breast, Artichoke Hearts, Bacon, Chipotle Remoulade.
Hmm I can handle that. So I went to the store and got the ingredients.
Preheat your oven to 400 degrees Farenheit. Cut the chicken into chunks, the bacon into halves or thirds (depending on how big your chicken chunks are), and cut the artichoke hearts into halves or thirds. Oh and you need toothpicks! 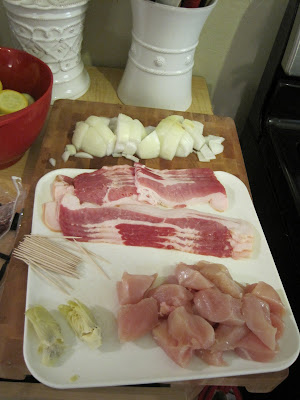 I added salt and pepper to my chicken and then just started assembling. 1 piece of chicken with one piece of artichoke, wrapped up in some bacon. Easy breezy. 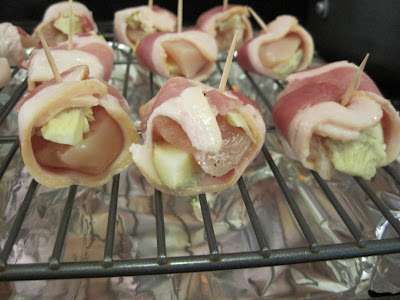 Then, call your husband away from studying to come take a picture for you, because your hands are covered in chicken and bacon. :)
Bake for 20 minutes. When the timer goes off, take one out and cut through the thickest part, just to be sure.
While the Chicken Brochette is cooking, make the Chipotle Aoili. There are tons of different recipes for this and I wasn't in the mood for another trip to the store so I worked with what I had. 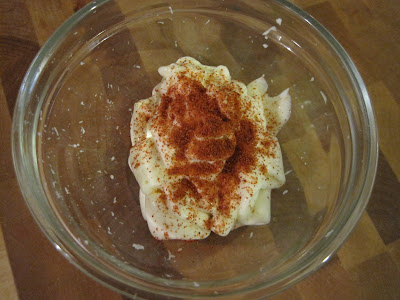 Just add some Mayo with Olive Oil to a small bowl and dump in some Cayenne Pepper. Mix and enjoy!
I also made Barefoot Contessa's Zucchini with Parmesan while the Chicken Brochette cooked. I halved the recipe and halved the zucchini and substituted summer squash for the other half. Thanks to Lindy for pointing out the recipe! 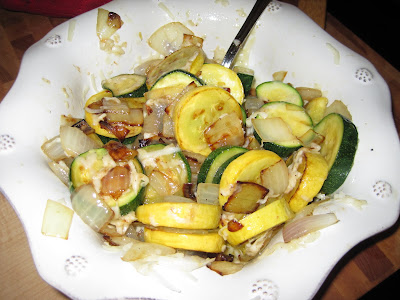 It was the perfect side dish to the Chicken Brochette. 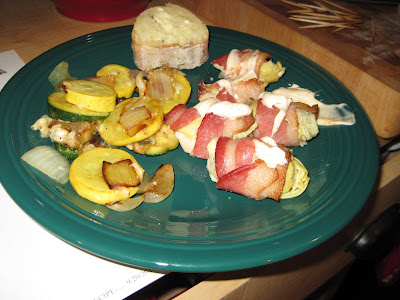 Yum Yum! this recieved rave reviews by the Dental Student. And lucky for him we didn't even eat half of it!
Hooray for leftovers and trying something new!

Posted by Christine at Tuesday, September 21, 2010

screw health! your hubby's in dental school not med school :) bring on the cheese!!!

What a hit! Looks delish!

Omg I love the Mantel ... havent had pleasure of going lately but have been craving these.. I couldnt remember exactly how they were so I did thin strips chicken wtapped around artichoke and then wrapped with bacon..... they were good so glad to see ur version ... will def try it out